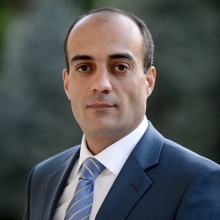 Arman Saghatelyan started his professional career in Mass Communications at Armenian National Television in 1991 as the anchor of business- informational program "Gorts".

From 1997-1999 he had his fixed-period military service at the Department of Information and Propaganda of the RA Ministry of Defense as correspondent and anchor of “Zinuzh” (Armed Forces) TV program. Since 2000 he worked as civil specialist on PR and Propaganda issues and as Anchor for "Zinuzh". Arman is a reserve officer of military journalism of RA Armed Forces. He was awarded a "Garegin Nzhdeh" Medal.

Arman was the co-founder, and from 1999 to 2002 - the vice president of "PanArmenian Network", as well as one of the founders of web editionwww.panarmenian.am and monthly edition .am.

From 2003 to 2004 he worked at "Hayastan" All-Armenian Foundation - first as PR consultant, then as Head of Public Relations Department.

Arman is actively involved in education. Since 2001 he teaches "Basics of PR and Advertisement", "PR Technologies", at the Departments of Political Science and Journalism in Russian-Armenian State University.

From 2011 to 2013 he was the head of the YSLU Information and Public Communication Technologies Scientific-educational Center:

He is a PhD of Political sciences, author of many scientific articles and educational curriculums, particularly for the course "Basics of Theory of Communication and Communicative Technologies".

From 2016 Arman is executive director of Armenian Public Radio.

Arman is the co-author and the manager of a number of projects in the sphere of Mass Communications. He is the author of a number of publications on PR and Communication.
At the Association Arman deals with a broad spectrum of issues related to the project development, Mass Media relations, implements the strategy of maintaining relations with potential partners, and manages educational programs.