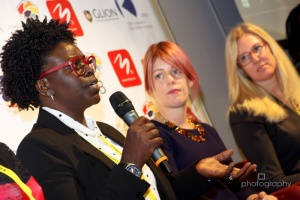 The #WCFGneevaWeek of events dedicated to the global communication industry registered participants from 30 countries all over the world, including first-time comers from: Israel, Barbados, Kenya, South Sudan, and Australia!

The event provoked intensive discussions, eliciting the rational of today’s social media impact and its crucial role as a public-opinion-maker, offering practical solutions for handling fake news and media manipulation, also touching on key strategies for successful country branding and building a political reputation, as well as sharing insight on valuable digital moves to leverage CSR campaigns, and the role of Artificial Intelligence and Virtual Reality on the future of business and humanity.

The forum had 5 major supporters, 9 media partners, 10 exclusive partner-agencies and a number of large professional associations > To ALL PARTNERS 2017 - Thank you!

Many thanks to Jon-Hans Coetzer, Chief Academic Officer at GLION Institute and Moderator of the Day! We share below his concluding comments for the day in Bulle, 17 Mar, as well as the summary of Sofia Paskal:

Within the latter decades of the 20th century continuing into the 2nd cusp of the twenty-first century, two very distinct phenomena have occurred:

• Communication has been redefined and given new meaning, referring increasingly to the technological revolution of the late twentieth century. By renegotiating the meaning of communication, we have also successfully renamed our own identity as a society – a global culture – managed by these technological innovations.
• Mainstreaming of globalization, which suggests an increasingly global scope of political, economic and social activity. Globalization swings between promoting a global homogeneity, and promoting a heterogeneity that challenges identity within the global community and the belief in a single global culture. Globalization is a by-product of the technological revolution that created modern forms of communication.
• To identify future issues concerning communication, one must accept a symbiotic relationship between communication and globalization, realizing that one is symptomatic of the other.
• The forms of media and communication provide the system that links the components of our national and increasingly global political, economic, and social systems.
• The World Communication Forum can rightfully claim a central role not only in communication and informed citizenry, but also in understanding and clarifying many of the central challenges of our rapidly changing world. Among these are :

- Globalization of our information environment as we experience a flatter world in which one-way communication is increasingly replaced by multi-directional transmission ; in which the North is not always the source and the South always the receiver.
- High stakes involved in struggles over ownership of the new media, as well as the resistance to the even greater consolidation of ownership over old and new technologies.
- A crisis in journalism brought about by the collapse of the economic model of commercially supported news enterprises wedded to an outmoded production and distribution system, as well as the upheaval wrought by parties formerly knows as the audience taking partial control over the means of production and dissemination of information.
- Epochal shifts in our information environment as we learn, both for better and worse, to live with technologies that provide opportunities and challenges unimaginable until recently outside the confines of science-fiction – and more are on their way.

• In these and many other similar trans-formative challenges, communication professionals have the opportunity to draw upon a wealth of disparate theoretical and empirical strands to clarify questions of real societal impact, illuminate complex realities, and help explore solutions to pressing problems.
• WCF members, individually and collectively, need to assert our centrality to any cogent and credible account of the central role of communication in our contemporary world.
•  Young scientific professionals should delivering complicated ideas and theories to broader audiences with no loss of sense and meaning. Particularities of perception and reception of the "millennials" generation, namely high frequency of data flow and ability to work with primary information sources, should be taken into account. Modern environment forces both recipients and donor to face unprecedented amount of information and raw data to process. Given this, the Forum audience put up a list of 11 most important skills, qualities and abilities required for today's communication professionals:

The winners  have been announced on the C4F website:

"The Forum in Geneva collected many communication specialists from all around the world. The event has developed with the time into a platform to go beyond local borders and talk about global communication with the participation of a diversity of the related counteracting parties. This has not happened accidentally, but because the WCFA association is the only organization of communication professionals in the world that fights to increase the influence of communication on the development of the world and goes beyond the classical service model of interaction with business, public institutions or politics".