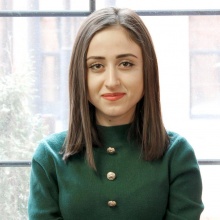 Works at SPN Communications since 2013. Working experience in public relations and communications is over 5 years. Before SPN Communications Anna implemented projects for the Ministry of Sport, VTB Arena and real estate companies.  While working in the SPN Communications Anna participated in the projects for National Russian Olympic Committee (program for the support of the Russian national team in preparation for the Winter Olympics, "One country - one team!"; Fans House of the Russian Olympic team at the XXII Olympic Winter Games in Sochi; The federal program for mass sports development in Russia "Sport for All"; Olympic Centre of synchronized swimming; House Fans Team Russia at the 16th World Championships in water sports in Kazan), KFC Russia (KFC International Championship of mini-football 2014-2015; International Festival KFC Footbattle in 27 cities of Russia and CIS – 2016). Currently Anna is responsible for coordinating all PR-activations one of the 2018 FIFA World CupTM Sponsor.