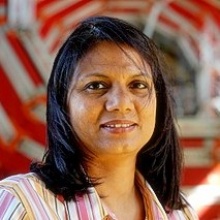 Dr. Archana Sharma was born in India, Following her passion, she became one of the top scientists at CERN, the European Organization for Nuclear Research. Dr. Sharma is an Indian experimental physicist and a staff member of CERN since 1987.

She is presently working on the Compact Muon Solenoid (CMS) experiment at the Large Hadron Collider (LHC) project in Geneva, Switzerland. Her recently concluded Higgs-Boson particle tests at CERN grabbed widespread attention in the world. During more than 20 years of work at CERN, Archana Sharma acted as a strong Indian connection with the activities of the organization. She travels to India on a regular basis and has initiated an internship program for Indian students at CERN.

Her contribution in research and development effort has been at various levels over the years. The recent evidence of a new Higgs-like boson at the LHC experiments is the culmination of the work of a collaboration of a global team of eminent scientists from all over the world, with Dr. Sharma as a member. Her specialization is in developing radiation hard detectors for sustained operation at the LHC upgrades.

She is also very active and enthusiastic in offering seminars and courses to encourage young students to widen their horizon of thinking in the field of physics.