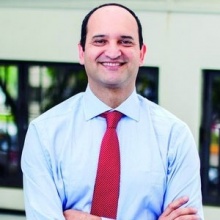 Prof. Pinotti acts in several spheres. He is one of Brazilian leading scientists, entrepreneurs and public actors committed to education, research and innovations in the areas of Biomimetics, Bioengineering (for automotive industry, cardiology, oncology, assistive technologies and neurosciences), and Innovation Models for Companies.

Prof. Pinotti is UFMG (Federal University of Minas Gerais) tenure Associate Professor. He has Ph.D. in Fluid Mechanics and Heat Transfer. In 2012 he was recognized by International Union of Societies for Biomaterial Sciences and Engineering (IUSBSE) as one of 100 World top scientists in Biomaterials Science and Engineering. He is also the president of the Latin American Society of Biomaterials, Artificial Organs and Tissue Engineering (SLABO).

Prof. Pinotti is the Head of three research and innovation laboratories with strong connection to companies - Bioengineering Laboratory (LABBIO), Research Laboratory Applied to Neural Vision (LAPAN) and Advanced Laboratory of Law and Innovation (ALADIN). He is inventor of 56 patents, over 10 of which are licensed. These accomplishments made him known as “Dr. Patent” in Brazil.

As entrepreneur, he founded his first company in 2004 (“Aptivalux Bioengineering”). In 2012, he decided to help companies and provide integrated technological solutions to new or established businesses, and to help start-ups and established companies to organize and implement innovation processes and business models. Due to his involvement in technology transfer of a number of technologies developed in LABBIO and LAPAN, Prof. Pinotti serves as mentor for a number of startups and advisor for different companies (Apion, Mediphacos,

Prof. Pinotti is also involved in state and federal policy development in Brazil.

Due to variety of spheres he is involved in, he integrates different approaches and solutions. Among his other activities in this sphere are being on the Board of Trustees (elected for two terms) of the Brazilian Association of Mechanical Sciences and Engineering, Technical and Scientific Board of Technological Park of Belo Horizonte and member of the Board of Trustees of the “Open Innovation” Forum Brazil. Prof. Pinotti was appointed to be on the Board of the “2014 Brazil-USA Frontiers of Engineering Symposium” by Brazilian Ministry of Science, Technology and Innovation. In 2014, Prof. Pinotti started R&D collaboration with the Moscow Institute of Physics and Technology (MIPT), including lectures on Biomimetics. He serves as member of Editorial Board of different technical and scientific journals in Brazil and in the United States.

Prof. Pinotti has been invited to deliver plenary talks to audiences in Brazil, United States, Russia, China, Italy, Scotland, Sweden, Chile, Argentina and Uruguay. He got awards from the State of São Paulo (Brazil) and Brazilian Ministry of Health for his contributions in plastic surgery and biomaterials (blood-contact). Prof. Pinotti is Alumni of Eisenhower Fellowship (USA) and The Moscow School of Politics Studies (Russia). He is also member of The College of Fellows of the International Union of Societies for Biomaterials Science and Engineering and The Copenhagen Institute for Futures Studies. Recently, he published a book “Homo Innovatus - Innovation Manual” where creates a new metaphor to replace the “triple helix” concept. The “four leaves clover” concept (Industry, Government, Investors and Academia) depicts properly the balance between the innovation actors.

- Laboratory of Applied Research on Neural Vision (LAPAN).
Established in 2008 with the partnership with Ricardo Guimarães (Ph.D., M.D. Ophtalmologist). LAPAN was devised to be a hub of innovation since it is the unique research facility of a public University established in a private hospital. This successful experience has catalyzed a new technological platform to perform screening tests for elementary school students (The Right Star Project).

- 1991 State of São Paulo (Brazil). 3rd Place for the Recognition of Quality for the patent “Substance to Protect the Skin During Cryotherapy”.
- 2007 Werner Von Siemens Prize of Technological Innovation, Siemens, Brazil.
- 2011 Great Prize of “Prêmio Brasil de Engenharia”, Ministry of Education of Brazil (http://www.premiobrasil.org.br/resultados.html)
- 2013. Prêmio FUNDEP/UFMG 2013 - Engineering. Prize of distinction granted every four years for one professor in each area of knowledge.