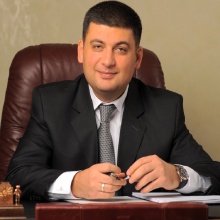 2000-2002 – Interregional Academy of Personnel Management, the Degree of Bachelor of Laws, Diploma of Legal Practice;

2002 – elected to the Vinnytsia City Council. Deputy Chairman of the constant Deputy Commission of the City Council for Human Rights, the Rule of Law, Deputy Activity and Ethics.

2006 - elected Mayor of the city of Vinnytsia at the age of 28, marked as the youngest Mayor of the regional center of Ukraine.

2010 - re-elected Vinnytsia Mayor for the second term, having received the support of 77.81% voters.Vice-President of the Association of Ukrainian Cities and Communities on issues of housing and communal services.

Orders "For merits" of II and III class, Knight's Cross of the Order of Merit of the Republic of Poland.