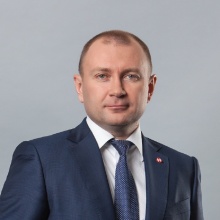 From the beginning of 2001 till 2015, Viacheslav Klimov was Director General of Nova Poshta. Together with his partner, he elaborated and implemented a business development strategy that pushed the company onto a leading position on the Ukrainian express delivery market.

In 2016, he was elected President of the non-governmental organization "SUP" – the first non-political union aimed at creating favorable business environment and spreading various innovations among the community of businessmen across Ukraine.

He obtained his master’s degree in aviation engineering from the Kharkiv Aviation Institute, in 1998. In the late 1990s he acquired experience in teaching at Alma Mater and advanced himself in air engine construction at the Antonov science and construction complex (Kyiv, Ukraine). In 2007, he obtained his MBA from the International Institute of Business in Kyiv, Ukraine.