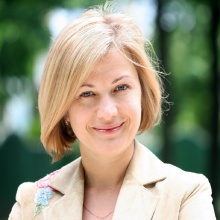 On May 2015, Ms. Gerashchenko was nominated by President as the representative of Ukraine in the Humanitarian Subgroup of the Trilateral Contact Group in order to resolve the situation in the East of Ukraine aimed at hostages-release and effective coordination of the humanitarian assistance efforts in the Donbas region.

Ms. Gerashchenko was first elected as Member of Parliament in 2007. She was reelected twice: in 2012 and in 2014. She also has more than 10 years of experience in journalism.

Ms. Gerashchenko holds a degree in journalism from the Taras Shevchenko State University of Kyiv. She also holds a Master’s degree in foreign policy and a degree in law.