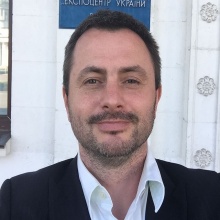 Director General of the “Expocenter of Ukraine" National Complex (Ukraine)

In 2015, he was appointed Acting Director General of the National Complex Expocenter of Ukraine. In this role, Maksym focuses on complete update and reorganization of Expocenter activities together with his new team.

Obtained professional management experience in senior positions in such companies as UMC, Leo Burnett, Samsung, is founder of UGE GmbH IT Development Company.

His creative life began in the 90's, when he directed several KVK teams.

In 2006, he organized Comedy Club UA project, whose television and club projects in the short time gained great popularity not only in Ukraine but also abroad. In Comedy Club UA, he was not only the manager, co-owner and producer, but also an actor, author and editor.

Since 2007, has been engaging in new, completely independent projects in television and show business.

Director General of the “Expocenter of Ukraine" National Complex (Ukraine)