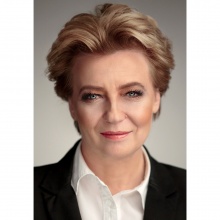 Hanna Zdanowska was born in Lodz, graduated from the Faculty of Civil Engineering and Architecture, Technical University of Lodz in a field of environmental engineering. After graduation, she designed some of Lodz` settlements, afterwards led her own company and worked as manager. She served six years as the Director of the Office of Lodz` Chamber of Commerce and Industry.

In 2006, Hanna Zdanowska became the Councilor of the Lodz`City Council, and later the Vice-Mayor of Lodz. In autumn 2007, she was elected a Member of the Polish Parliament and in 2010 - for the position of the Mayor of the City of Lodz. In 2014 she was elected by the Lodz` inhabitants for a second term.