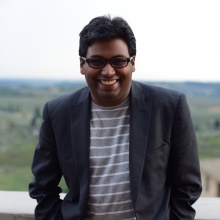 Umapagan Ampikaipakan is a media moll. You can find him almost everywhere - from newsprint to the world wide web, from radio to television - where he contemplates everything from the idiosyncrasies of Malaysian politics to his unnatural obsession with the written word.

Blessed with a critic’s pen and a reader’s enthusiasm, Uma (as he is fondly known), is one of our foremost literary voices. His long running radio show, Bookmark on BFM89.9, is Malaysia's pre-eminent broadcast on all things book related. (Being the only show of its kind on Malaysian airwaves helps with said pre-eminence.)

He is also a film critic with At the Movies, a pop-culture columnist for #edGY, and the co-host of BFM89.9's drive time radio show, The Evening Edition.

And when he's not doing all of that, Umapagan Ampikaipakan runs The Cooler Lumpur Festival, KL's (now) yearly gathering of literary minds and thought leaders and Asia’s first and only festival of ideas.