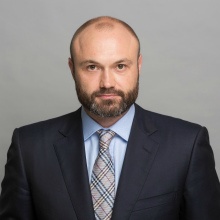 As the Chairman of NSSMC since 2015, Timur Khromaev comprehensively manages its activities including coordination of NSSMC Commissioners’ work. His competence also covers convocation and conduction of regulator’s meetings, regulation of activities of Regional Offices, hiring and staffing issues in accordance with current legislation, and representation of the regulator.

He started his career in the Ministry of Finance of Ukraine in 1997. He began as a leading specialist and became the Head of Capital Markets Division in External Debt Department. In 2001, he obtained a position of Deputy Chairman of the Board in CJSC “Commercial Bank NRB-Ukraine”, and worked on the same position for CJSC “TAS-Investbank” in 2002. Timur Kromaev established investment company “ARTA”, which is among the leading investment companies in Ukraine in February, 2013. Since 2013, he obtained a position of Executive Director in GASE Energy, Inc.

Timur Kromaev received his first economic education in Union College, New York, USA. Then he continued his education in Taras Shevchenko National University of Kyiv, Institute of International Relations on the faculty of international law (2008-2010) and gained a master degree.