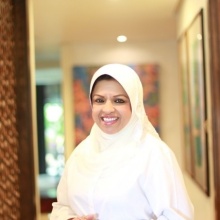 She received her early education in English and Arabic from Northam Road Girl’s School and Madrasah Tarbiah Islamiah. She pursued her secondary education at St. Georges’ Girls School and gained entry into Tunku Kurshiah College, a prestigious public boarding school in Malaysia.

Shahrizat received her law degree LLB (Hons) from the University of Malaya in 1976. Before joining politics, she was an active member of the corporate world. Between 1986 and 1989, she was made director of several public-listed companies. In 1986, she made history when she became the first Malaysian woman to be appointed as the Chairman of a conglomerate of two public listed companies on the Kuala Lumpur Stock Exchange (KLSE), namely Island & Peninsular Berhad and Austral Enterprises Berhad.

In the 1995 General Election, she was one of the women candidates to be fielded in Kuala Lumpur. She retained her parliamentary constituency seat for Lembah Pantai in the 1999 and 2004 General Election, creating history by becoming the first Member of Parliament to serve the Lembah Pantai constituency for three consecutive terms. The next election cycle in 2008 saw Shahrizat relinquish her parliamentary seat, and was followed by her appointment as a senator in the Upper House in 2009.

Shahrizat was elected as the Head of Wanita UMNO (United Malays National Organisation) in March 2009, the women’s wing of UMNO. UMNO is the leading Malay political party largely responsible for Malaysia’s independence in 1957.

Shahrizat Abdul Jalil served as the Minister of Women, Family and Community Development of Malaysia until May 2012. The agencies under her portfolio comprised the Women’s Development Department, the National Population and Family Development Board, the Social Welfare Department, the Malaysia Social Institute and the Non-Aligned Movement (NAM) Institute for the Empowerment of Women.

Shahrizat Abdul Jalil is married to Datuk Dr. Mohamad Salleh Ismail, a scientist, with whom she has three children.