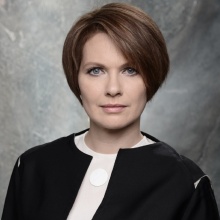 Since 2010, she has been working in 1+1 Media group. During her career there, she transformed the TSN night news, creating the first Ukrainian TV tabloid and from 2011 to 2014 she headed the TSN editorial office at the 1+1 Channel.

For 12 years in her TV work experience, Tetiana acted as a news editor, releasing news on hourly basis, in a marathon mode, as a reporter, covering in particular the military conflict in Georgia in August 2008. She was involved in the creation of news, releasing them on TVi.

She is the author of the book "EuroMaidan With TSN Eyes", telling about the journalists' work for the Television News Service during the events in the winter period of 2013-2014.

Tetiana is also a lecturer at the High School for Media & Production, teaching the course "TV presenter of information programs".