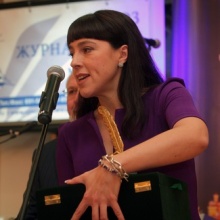 Olga Bychkova graduated with a diploma in Journalism from the Faculty for journalism at Ural State University. She has worked for multiple-circulation newspapers such as Ironworks, "Moskovsky Komsomolets", and "Moscow News".

Olga is Laureate of the Moscow Union of Journalists (2010) for the creation of current political, economic and legal programs.