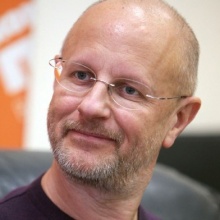 Dmitry Puchkov is a popular Russian video-blogger, writer and translator. His very first occupation was when he served the army, on a military aircraft. Subsequently, he changed a number of professions from mechanic and taxi driver to cinema expert and librarian.

In 1992 he joined the militia of St. Petersburg and served there until 1998, when retired as a lieutenant. In the same year he began his publications in magazines and websites, focusing on computer games and signing his articles with the pseudonym Goblin. As a result, he was engaged in the localization of many computer games (Gorky 18, Duke Nukem: Manhatten Project, Hooligans, and others) and the translation of dozens of films, hired by official television and media channels or just informally joining cinema projects. He is popular as the translator of "Boomer" and "The Lord of the Rings".

Dmitry one of the most influential Russian video-bloggers: Dmitry Puchkov.