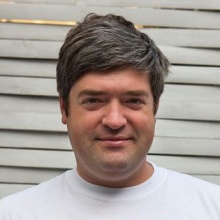 Co-Founder and Board Chairman at Advertos Media, Initiator of "Bloggers Against Litter"

Sergey Dolya is CEO of Soundline, co-founder and Board Chairman at Advertos Media, and a popular blogger and photographer, author of A Virtual Traveler’s Page. According to Live Journal, in 2013 Sergei’s blog reached 66532 subscribers, thus ranking fifth in Russia’s blogosphere.  He is also leader of the popular movement “bloggers against litter”.

Sergey was born in Kharkov in 1973, yet soon after his birth his parents moved to Dubna, near Moscow, where he spent his childhood. After graduating high school, he did not go to college and worked for a year as a mechanic, and then he got his diploma from Tver University.

In 2012 Sergei opened his own restaurant in Moscow called Dolkabar and in the following year he entered the media industry as a co-founder and chair of the board at Advertos Media communications agency.

As leader of “bloggers against litter”, Sergey initiated the first action of the movement in 2011, covering 120 cities across Russia. His project won the prestigious Russian internet award "ROTOR -2011", taking the first place in the nomination "Event of the year". The next action was held in September 2012, and its main partner was the company VimpelCom ("Beeline").

Co-Founder and Board Chairman at Advertos Media, Initiator of "Bloggers Against Litter"