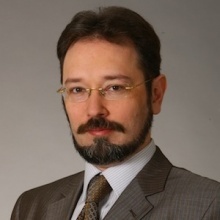 Director of Development and Communications Department at RVC

Evgeny Kuznetsov is a renowned Russian expert in communications and PR campaigns.

In the early 90s his main activity and business functions were associated with opinion research and political analytics. His track record includes a number of copyrighted methodologies of social-political and technological forecasting. Afterwards, he was a pro-active participant in federal and regional election campaigns.

In 2001–2002 Evgeny Kuznetsov worked for “North-West Strategic Projects Center”. He was the author of a number of documents on regional development. In the next 5 years, till 2007, he joined Imageland Edelman PR Agency, where his work functions included a wide range of activities starting from integrated campaigns for corporate clients to public and political campaigns of a federal scope.

In 2006, jointly with Simon Kordonsky, he established the Foundation for Assistance to Science, Education and Medicine. Within the framework of this fund he launched a series of public campaigns in medicine and healthcare (including development and support of patient’s right movements) and created a range of state development concepts. Among other things, the Fund also provided a set of concepts and methodologies instrumental in establishing specific communications between science and business communities and executed a variety of projects in this area.

In 2009 Mr Kuznetsov became Head of Committee of Science Community Communication of Russian branch of IABC (The International Association of Business Communicators).

Since 2009 Evgeny acts as Director of Development and Communications Department of Russian Venture Company (OJSC).

Director of Development and Communications Department at RVC