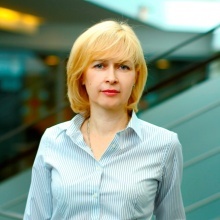 Elena Sosnovtseva is the former Communications Director at Absolut Bank's HQ based in Moscow, Russian Federation.

Elena graduated from the National University of Economy as a professional economist and has an additional diploma in PR and Communications. Currently, she is doing a MBA course in Marketing Management.

Elena is a leading expert in financial communications, with almost 10 years of experience. She worked in well-known financial institutes and banks such as BSGV (Societe Generale Group) and VTB Capital. In 2011, Elena was appointed for the position of Communication Director at Absolut Bank.

She is a member of several Russian and International business and communications associations and also one of the council experts for the Silver Archer AWARD contest which rewards the best communicators in Russia.