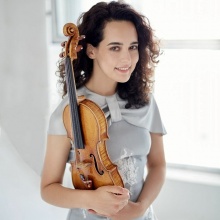 Alena Baeva is fast emerging as one of the finest violinists of her generation, having already carved out an impressive career to date and working regularly with many of the world’s finest orchestras and conductors.

Born in 1985 to a musical family, Baeva took her first violin lessons at the age of five under renowned pedagogue Olga Danilova in Alma-Ata, Kazakhstan. From 1995 she studied with Professor Eduard Grach at the Central School of Music (an affiliate of the Moscow State Tchaikovsky Conservatoire), and from 2002-2007 at the Moscow Conservatoire itself. In addition to her formal studies, Baeva was a protégée of Mstislav Rostropovich (at whose invitation she studied in France, 2003) and Seiji Ozawa (whose Academy in Switzerland she began attending in 2007).

She has been frequently broadcast live in concert on radio and television across Europe, Asia, and North America. Amongst the conductors with whom she works regularly, Baeva has a long-standing collaboration with Valery Gergiev and Vladimir Jurowski. Her performance of Shostakovich Violin Concerto No.2 features as part of the box-set DVD collection released by the Mariinsky Theatre/Gergiev in 2015; and – with Jurowski – Baeva will perform and record the R. Strauss Violin Concerto in London (London Philharmonic Orchestra) and Berlin (Rundfunk-sinfonieorchester Berlin) respectively.

She lives in Luxembourg since 2010 and is the mother of two children.