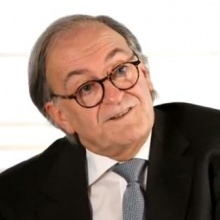 Leandro Herrero, a psychiatrist by background, spent many years in hands-on leadership positions in global companies before founding The Chalfont Project Ltd, a leading consulting group of organizational architects. He pioneered Viral Change™, an unconventional and very successful change management methodology and leads the Viral Change ™ Global network of companies.

As a speaker, Leandro Herrero has won the highest recognition from many audiences, big and small, at public forums and in-house events.

As an author, he has published several books on management of change and leadership.

As a consultant, he works with organizations of many sizes at different levels: from Board and top management and  leadership teams to staff in Business Units. His consulting work focuses on management of change, leadership, human collaboration, organizational branding and innovation.

Most of the conventional 'change management' programmes fail. This is mainly due to the fact that they are often based on wrong assumptions such as:
"When we change the process/system, people will change their behaviour. Changes need to come from the top and filter down. Big changes need big actions. Cultural change is a painful, long-term process with no short-term results."

Viral Change(TM) provides a completely different framework for change. It is based on recent 'discoveries' across disciplines such as network and behavioural sciences. It shows how a combination of the right language and frame, a small set of non-negotiable behaviours (all spread by a small number of activists) and the creation of 'tipping points', creates a lasting cultural change in organisations.

Unlike conventional methods of change management, Viral Change(TM) is faster, far more effective, potentially more inclusive and certainly long lasting. Since change is constantly present in any organisation, this book will appeal to people at different levels of management or leadership, who want to reshape their culture through the power of internal social networks and aim at greater organisational effectiveness in day-to-day organisational life (not just during change initiatives).

In his pioneering book: "Viral Change™", Leandro Herrero addressed how a relatively small number of highly connected individuals could orchestrate change in an organisation through a small set of non-negotiable behaviours.

In this new book, the author now addresses Viral Change™ in action, showing that the more primal 'Homo Imitans' is still a powerful force. Understanding how social, behavioural infection works is the basis for the orchestration of any 'epidemic of success', be it a successful change inside a firm or a counter-social epidemic to tackle negative socio-macro phenomena. Academia, business consulting and business literature have long differentiated themselves from the macro-social reality. For many years, and still today, it feels as if 'the nine-to-five' business life has little to do with 'the external world' of social changes.

'Homo Imitans' bridges these two artificially separated worlds by explaining how Viral Change™ mechanisms work everywhere: in the spread of violence in streets (and also in how to reverse it), in employee engagement inside the organisation, in the adoption of new behaviours and new company culture - and in how it can go wrong.

'Homo Imitans' will appeal to anybody interested in social change, with particular emphasis on how Viral Change™ works inside an organisation. As such, this is a key practitioner's book for any manager and leader of any organisation, written by the creator of Viral Change™ in the same successful style as his previous books.