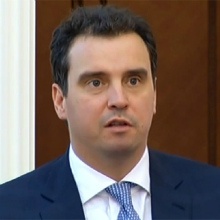 Minister of Economy and Trade of Ukraine

Aivaras Abromavicius is a Lithuanian-Ukrainian manager and investment banker. He became Ukraine's Minister of Economy and Trade in December 2014. He has started his career in Hansabank, the largest Baltic bank, where he was appointed chairman of the Stock market department. Over the next three years, he was a Head of the Trade department at Brunswick Emerging Markets.

Aivaras has a BA in international management from the private Concordia International University Estonia. Later, he became a partner and fund manager at the East Capital asset management group, which is a major player and investor in Ukraine. He have been managing assets on behalf of clients from Continental Europe, USA, Middle East and investing them in Eastern Europe for nearly 20 years.

Minister of Economy and Trade of Ukraine