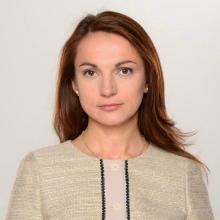 Head of the Foreign Affairs Committee of the Verkhovna Rada

Hanna Hopko is a young Ukrainian political leader, Member of Parliament and Head of the Foreign Affairs Committee of Ukrainian Parliament. She is an expert in media and political communication.

Hanna Hopko was one of the leading members of the EuroMaidan Civic Sector during the Revolution of Dignity and has launched the “Reanimation Package of Reforms” initiative – a coalition of Ukrainian NGOs focused on efficient implementation of reforms in Ukraine. Moreover, she was an expert at the “Platform of Reforms” Inter-factional Parliamentary Group. Later she was appointed as Chairwoman of the Foreign Affairs Committee. Currently, Hanna Hopko is a member of Executive Committee of Reforms of The National Council of Reforms and a member of The Anti-Corruption Action Centre.

Hanna elaborated various training programs for Ukrainian and foreign civil society activists. She was a co-instructor in the UNEP and OSCE Initiative “Environment and Security: Transforming Risk into Cooperation”. Hanna was the coordinator of National Coalition of NGOs and Initiatives “For Smoke-Free Ukraine”. She advised the WHO Framework Convention on Tobacco Control Secretariat in Geneva.

She is the author of “Supporting Ukraine’s struggle, the world is helping itself”, which was published at “The Day” newspaper at the ranking “Ukraine Incognita. Top 25”. Hanna Hopko has a number of awards among which is the National Democratic Institute Democracy Award and the Georgetown University Certificate of Merit. According to the Foreign Policy magazine rank, she became the Leading Global Thinker (2014).

Head of the Foreign Affairs Committee of the Verkhovna Rada