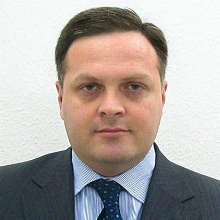 Deputy Chairman of the Parliament of Georgia

Giorgi Baramidze is a Georgian politician who served as State Minister for European and Euro-Atlantic Integration and Vice Prime Minister from 2004 to 2012. In 2012, he was elected as a Vice-Chairman of the Parliament of Georgia and is currently holding this position.

He became one of the founders of the Green Moovement of Georgia and a member of its Steering Council. From the first days after the conflict started in Abkhazia he commanded a humanitarian center for the assistance of the Abkhaz population under the auspices of the Green Party of Georgia. Baramidze commanded State Center for Search of the Missing and Freeing Prisoners. Due to his zealous efforts up to 3000 peaceful population left in the conflict zone as hostages controlled by separatists.

Moreover, Baramidze conducted a research on United States Functioning government policy as an Associate Researcher at Institute for the Study of Diplomacy of Georgetown University in Washington, D.C..

Baramidze was elected to the Parliament of Georgia and has served as a Chairman of Defense and Security Committee and as a Chairman of Georgian Parliamentary Delegation to NATO Parliamentary Assembly. Having several ministers resign Baramidze became the first director of joint Georgian government-UNDP program. He played an active role in the Rose Revolution in November 2003. Later he was appointed as a Minister of Internal Affairs and Minister of Defense of Georgia.

Deputy Chairman of the Parliament of Georgia