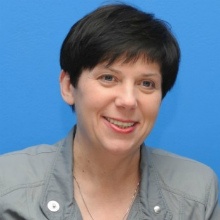 Chief Editor of the online edition and print journal Telekritika

Natalia Ligachova is Chief Editor of Telekritika web portal and Chairperson of the directorial board of Telekritika Public Organization. She graduated from Taras Shevchenko National University of Kyiv, Department of Journalism (1984). She worked at the sociological researches department and at the cinema editorial board at the State Broadcasting Company of the Soviet Ukraine, then later on – at the Ukrainian State TV Company. She was editor and host of such programs as All About Cinema, Cinema Without Acting. Later, she worked as an observer on cinema issues in Kievskie vedomosti (Kiev News) newspaper (1992-1995). From 1996, she worked at Den (Day) newspaper where she had her author column TV Week with Natalia Ligachova. In 2000 – 2001 she was Deputy Chief Editor of Den.

In 10 years of its existence, Telekritika became the main platform for professional discussions on media, documentary filmmaking and TV films in Ukraine. Natalia is the Distinguished Journalist of Ukraine (2007), winner of Internews Media Leadership Award (USA, 2008) and Gerd Bucerius Prize for Free Press of Eastern Europe (ZEIT-Stiftung Ebelin, 2011). She was honored by the National Council of Ukraine on Television and Radio Broadcasting for the television and radio broadcasting development in Ukraine. She was named among 100 most influential women of Ukraine (Focus magazine).

Chief Editor of the online edition and print journal Telekritika