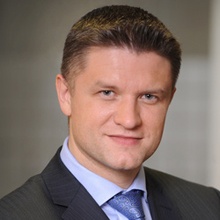 Deputy Head of the Presidential Administration of Ukraine

Dmytro Shymkiv is a technology entrepreneur, innovator, and respected professional with 20 years of leadership experience in the IT industry across Ukraine, Europe and the US. Since May 2009, as General Manager of Microsoft Ukraine, he had successfully led the company from the recession towards a new growth across all product groups and customer segments, as well as developed new business opportunities.

Under Dmytro’s leadership, Ukraine was repeatedly named one of the top-performing Microsoft subsidiaries worldwide, including the award as the Top Subsidiary of the Year in fiscal year 2011. Starting from 2011, Dmytro has been listed among TOP 10 Best Ukrainian CEOs, according to an influential annual ranking of Ukrainian executives Investgazeta. TOP 100, which also named him #1 Ukraine’s best CEO in 2012.

Deputy Head of the Presidential Administration of Ukraine