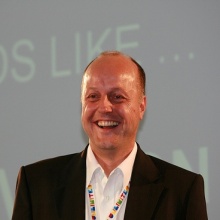 Jochen Spangenberg (M.A.) has been working in the media industry since the early 1990s both on the journalistic and the organisational / strategic side. From 1994 to 1998 he was a contributor to BBC Radio & TV programmes, primarily in News & Current Affairs. Then, he worked as Chief Operating Officer of Altus Analytics AG, Berlin, being responsible for streaming media operations, media consulting, and all R&D projects of the company. In 2003, Jochen joined Germany's international broadcaster Deutsche Welle (www.dw-world.de). He first worked in the Online department and, since January 2006, in the Directorate of Strategy, Marketing and Distribution. His main tasks at Deutsche Welle to date have included strategy development and subsequent implementation of digital media services, and co-ordination of the broadcaster's innovation projects. Jochen is also a Visiting Lecturer at various Universities (primarily at the Free University Berlin - focus on Media Economics, Media Politics and Digital Strategies), a frequent speaker at conferences, and moderator of events and workshops that cover issues in the digital media, telecommunications and information technology sector (www.me-mod.de). He is the author of the book The BBC in Transition.