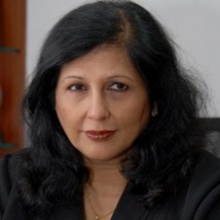 Roma Balwani is currently Senior Vice President & Group Head, Corporate Communications at Mahindra & Mahindra Ltd., one of India’s leading business houses. She was recently included in Influence 100, a listing of the 100 Most Important In-House Communicators in the World, brought out by the renowned Holmes Global Report. It describes her thus:

Roma Balwani has carved out a reputation as one of India's most outspoken PR professionals, both inside and outside her company. That sense of determination has helped her elevate public relations at automotive group Mahindra into a board-level function, something that is still a rarity at many Indian companies.

In a career spanning 30 years, Roma has served in a variety of roles, including as Vice President and Head of Communications at Aptech, a leading Indian IT company.

An Economics graduate with a post-graduate diploma in Marketing from the University of Mumbai, India, Roma has been instrumental in communicating the Group’s transformation into a global powerhouse.

This is clear from the fact that the media has consistently given Mahindra the highest rank amongst the top five corporate houses in India over the past five years.

Roma has highlighted Mahindra’s commitment to a sustainable future in the media. Mahindra’s Corporate Social Responsibility initiatives have also been appropriately showcased. The Mahindra Corporate Communications team received the Distinguished Honoree medal at the Annual Stevies International Business Awards for Communications or PR Campaign of the Year - Public Service, for showcasing the work done on the Millions Against Malaria CSR Campaign initiated by Mahindra Aerospace. The Stevie Awards are the world's premier business awards and were created to honour and generate public recognition of the achievements and positive contributions of organizations and working people worldwide.

She has also received several prestigious communication related accolades in the course of her career, including the prestigious Hall of Fame 2010 award by the Public Relations Council of India (PRCI). The latter is the national body of Communication, Advertising, Media, academics and PR professionals in the country. Most recently, Roma received the ‘Leading Woman in PR and Communication’ award at the 3rd Edition of the Women Leaders in India  Awards, organized by iiGlobal. Annual Women Leaders in India Awards ceremony celebrates the remarkable achievements of the successful women leaders, entrepreneurs and professionals. The event recognizes an exceptional leader who has played an important role in the specific sector and developments on various levels.

Roma is also a member of the PR Committee of the Bombay Chamber of Commerce and Industry (BCCI) and the Association of Business Communicators of India (ABCI) which are leading business and trade associations in India.

She has successfully completed two prestigious global leadership programmes - the Michigan Ross School of Business and the Mahindra Universe programme for senior managers at the Harvard Business School, Boston, Massachusetts.