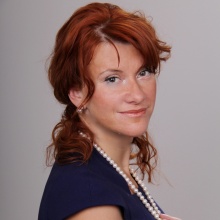 As a little girl, I experienced some memorable events that greatly influenced my personality – I kept them as childhood souvenirs. One of them happened when I was just 3 years old. My father slapped me for being naughty. I didn't even cry. My reaction was to start yelling at him: "Are you really that stupid? You hurt me!" Another flash-back, when I was 10: using a closet, I divided the room I shared with my sister. That was the deliberate creation of a  world of my own at the time. My third souvenir: the years I spent in Cuba. I was 12 or 13 then… What an atmosphere – such a fascination by the revolution, and I was part of it!

Greatest failure (or rather: a challenge I have not overcome yet) – probably the fact that there are fewer people involved in my social creativity than I had expected…

For over 25 years, Yanina has been actively practicing Tai Chi and she holds a gold medal from the championship in Europe for 2013.

She is the author of the book “Stop Frame” dedicated to the psychoanalytical approach in HR.