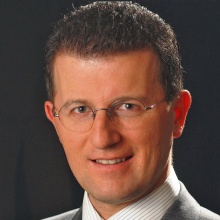 Nicolas G. Mueller completed his master studies in chemistry at the University of Bern in 1992 and obtained his doctorate in physics in 1998. During this time, he spend 7 years doing scientific research in nano-science and laser engineering.

He subsequently worked for several years as a coordinator and delegate for the International Committee of the Red Cross in the field of international crisis management (including a longer mission from 1999 to 2001 in Afghanistan and Pakistan).

From 2001 to 2005, he worked as a strategy consultant for an international management consultancy firm and was a project manager in the fields of corporate strategy, controlling and risk management for the federal administration.

Between 2005 and 2007, he developed the concept for the Swiss information operations force. Leading a team of experts, he developed scenarios dealing with non-military threats.

As general staff colonel he does strategic foresight for the Swiss Government and was the  deputy head of operations of the Swiss Land Forces and a reconnaissance battalion commander.

He is presently adjunct professor in international relations at the Geneva School of Diplomacy, where he teaches national risk and crisis management.

In 2013 he was awarded a doctorate in int'l relations honoris causa for his effort to reduce human suffering in the world and to promote better crisis management.

Since 2017 he is responsible for the Evaluation and Procurement of the Weapons and Ammunition of the Swiss Armed Forces at armasuisse.