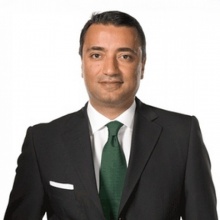 Metehan Demir was born in 1970 in Edremit, Turkey. Graduated from Turkish Air Force Academy in 1990. Following his service in the Turkish Air Force till 1994, he started his journalism career with Turkish Daily News.

He moved to Turkey's mass circulation Hurriyet daily in 1998.

His academic career continued in abroad. Following his certificate program Dynamics of US Foreign Policy in the US, He received his master degree from King's College, London on War Studies. Later, he also received certificate degree from Harvard University on Executive Program.

He had been in many prestigious positions as a journalist, including Ankara Bureau Chief of Channel D, Sabah, Hurriyet. He was also Turkey Bureau Chief of Aviation Week magazine for 5 years.

He is currently political commentator of Turkey’s Haberturk tv, TRT, VOA, BBC and some other international media instituions, while he writes articles for various websites (superhaber) and attends seminars as speaker about Turkey's political feature and risk analysis.