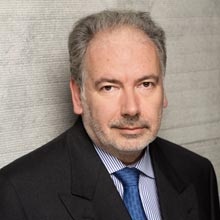 Yves Robins is Senior Vice-President, External Relations and Corporate Communication at Dassault Aviation in France, Europe's leading designer of business jets and combat aircraft. His responsibilities include all aspects of the company's and its subsidiaries' communication worldwide. Before that, he held the position of Vice-President International Relations for Dassault (from 1999 to 2006). An international civil servant from 1988 to 1999, Yves Robins was Director of Information at the Western European Union (WEU) Assembly, and a member of the Board of Directors of the Euro-Atlantic Foundation. He also worked as journalist: he was Chief Editor of "Aerospace International" and of "Defense Magazine". For the German press group Mönch, he was Head of their NATO-office in Brussels (from 1975 to 1977) and, later of their Paris office (from 1977 to 1981). A Belgian citizen, he holds a degree in Law and in Journalism from the University of Brussels and has studied Anglo-Irish literature and poetry at Trinity College (Dublin).