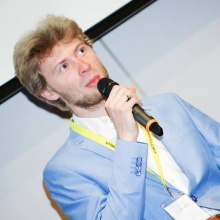 Evgenii Glushkov graduated from Moscow Institute of Physics and Technology, where he worked on superconducting devices for quantum computation. He has been actively promoting quantum technologies since 2013 when he received a grant from Russian Youth association to popularize science to high school students.

He was also a winner of various popular science competitions (Science Slam, Science Battles, etc.) and gave a variety of public lectures for broad audience on quantum technologies. At different stages of his career he was supported by Abramov Foundation, Potanin Foundation, ZKS Foundation.