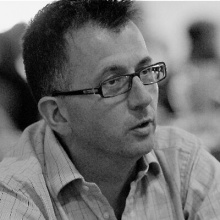 Jimmy has been active in the world of the digital since the turn of the century, taking both content and communications roles and driving the cultural shifts needed in organisations, in order to help them perform better. Recently, he writes most regularly for IBTimes. He also shares digital insight in publications at The Huffington Post.

He runs a consultancy, Zinzan Digital, which provides communications, change and delivery strategies for heads of state, blue chip corporates, start-ups, NGOs, and individuals, working from nose to tail to hone platforms, content, social media and engagement, helping the client interact with its target audience better, so that the audience gets to know the client much more effectively...

He has worked in editorial digital roles at two newspapers - as executive editor at the Guardian (responsible for the digital side of the two bigger B2B areas - education and public sector), and as editorial director for digital at the The Independent.

Intertwined with the above functions were senior roles in digital government. First, as head of communications for the Prime Minister’s Office in Downing Street, delivering high profile projects and content for two Prime Minister, and also as head of digital diplomacy at the Foreign and Commonwealth Office, spearheading the drive to make the FCO an organisation recognized as a leader with its digital performance - engaging and communicating across a huge digital and social space in 40 different languages.

And, amongst all that, he’s worked for two communications companies - in consumer PR, at Freuds (as digital director), and in reputation management, at Portland (as Senior Associate for Digital).