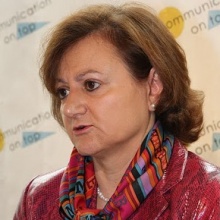 Spokesperson for the Spanish Presidency at the Council of Europe

Her education includes a Master degree in International Affairs (MIA) from Columbia University in New York. She graduated from the Faculty of Journalism of the Universidad Autónoma de Barcelona and before that completed Studies on Anglo-Germanic Philology at the Universidad Autónoma de Barcelona. Cristina speaks six languages - Catalan and Spanish (mother tongues), English, French, fluent Russian and basic German.

Spokesperson for the Spanish Presidency at the Council of Europe