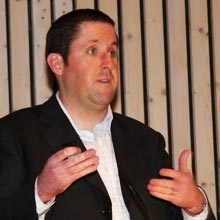 While at APCO, Mr Bostrom’s clients include those in the healthcare, financial services, association and consumer goods sectors. His campaign for the United States Travel Association won the PRNews award for digital public affairs campaign of the year in 2010.

Prior to joining APCO, Mr Bostrom acted as the vice president, client services, for 2 years for Mindshare Interactive Campaigns in Washington, D.C. Mr Bostrom led the client service team for the company, driving the organization into new sectors of work. His clients included those in the health care, consumer products, government, non-profit and entertainment industries.

Mr Bostrom holds a Master of Business Administration from American University in Washington, DC and a Bachelor of Arts in Communications from the University of Wisconsin in Madison, WI.