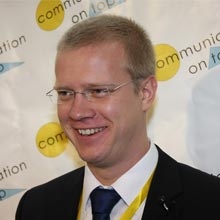 Ansgar Thiessen is a scientific advisor and member of the board of the Swiss Association for Crisis Communication since 2009.

In his academic studies, mainly at the Université de Fribourg, he specialized in the effectiveness of strategic crisis communication and reputation management for both profit and non-profit organisations.
He has also been working for federal authorities in Switzerland on the topic of communication controlling.
Thiessen was scholarship holder of the Foundation of German Businesses and the Swiss National Science Foundation.

Selected publications:
- Thiessen, A. (2009):
"Crisis management in the media society – Communicative integrity as the key to safeguarding reputation in a crisis".
In: Klewes, J./Wreschniok, R.: Reputation Capital. Building and maintaining trust in the 21st century. Springer.