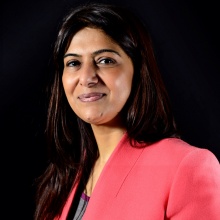 Founder of VandaK, an upcoming fashion brand for enterprising women

Vanduta Khurana, along with her husband Anil, co-founded Daks India, a textiles manufacturing company, back in 1992. It has emerged over the years as one of India’s top manufacturing company for garments, home textiles & top luxury brands worldwide. n2-X was co-founded also along with Sean, a scientist in USA. n2-X is the world’s first social media offline brand. It will change the way people connect without using internet.

Vanduta studied Economics Honours at Maharani College Jaipur, She went to do her MBA in Marketing. She is an avid reader of non-fictional & historical material compiled by likes of V.S.Naipaul and Orhan Pamuk. She has climbed the mountains at Kilimanjaro & Tiger Nest, Bhutan and has half attempted scuba diving at Phuket and Egypt. She is ready to learn fire walking now.

She is writing a paper on Entrepreneurial form of Democracy which is such designed that every politician becomes accountable. For lack of better word she calls it e-Democracy.

Her mantra to success is what Winston Churchill said: "Success consists of going from failure to failure without any loss of enthusiasm!"