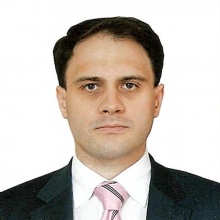 Roman Vassilenko was born in 1972 in Shymkent.

He graduated with honors from the Military Academy of Economics, Finance and Law of the Armed Forces of the Russian Federation in 1994, receiving a degree as a referent interpreter and an expert in international law.

From 1994 to 1996, he served on the staff of the International Relations Department of the Presidential Administration of the Republic of Kazakhstan.

He has been on Kazakhstan’s diplomatic service since September 1996, first as Third Secretary and later as Second Secretary at the Embassy of Kazakhstan to the United Kingdom of Great Britain and Northern Ireland.

In 1999-2000, he worked as Assistant to the Head of Prime Minister’s Office of the Republic of Kazakhstan.

In 2000-2007, he served as First Secretary and later as Counsellor of the Embassy of Kazakhstan in the United States.

In 2012-2013, Roman Vassilenko worked as Deputy Director of The Nazarbayev Center, playing an important role in the initial set up of this multifunctional scientific, analytical, humanitarian and educational public institution.

From April 2013 to April 2014, he worked as Ambassador-at-large at the Ministry of Foreign Affairs overseeing the global communications efforts of The ATOM Project, among other activities.

In April 2014, he was reappointed Chairman of the Committee for International Information of the Ministry of Foreign Affairs of Kazakhstan.

Roman Vassilenko holds the diplomatic rank of Envoy Extraordinary and Plenipotentiary of Second Class. He speaks English, French and Vietnamese. He is awarded with the state award, the medal “For Valorous Work” (2008), and is married with three children.