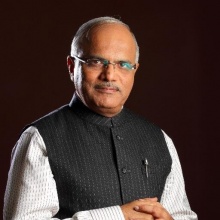 Vinay Sahasrabuddhe is the National Executive Vice President of the Bharatiya Janata Party (BJP). An activist-researcher at the core, Dr. Sahasrabuddhe has been heading Rambhau Mhalgi Prabodhini (RMP), Mumbai for the last 26 years as its Director General. RMP is South Asia's only training and research academy for elected representatives and voluntary social workers. For over a decade, he was in charge of the National Training Cell of the Bharatiya Janata Party (BJP). He also headed BJP’s Good Governance cell for a while.

As a student activist, he had offered satyagraha and was behind bars for over a month during the Emergency of 1975. He was also national secretary of the Akhil Bharatiya Vidyarthi Parsihad (ABVP) in his student days. He has also worked as member of the Senate and Management Council of the University of Mumbai for several years. For several years he was a member of the Board of Governors of YASHADA, academy of development administration, Pune and currently holding a similar position at the Sardar Patel Institute of Public Administration (SPIPA). Between 2002-2004, he was Chairman of the western regional committee of CAPART (rural technology council) of the Govt. of India. In 2013, he was elected as Vice-President of the Asiatic Society of Mumbai, a 208 year old prestigious society.

A freelance journalist since his college days, Sahasrabuddhe is a regular contributor to several Marathi and English language dailies and weeklies and a blogger as well. The University of Mumbai awarded him a doctorate in Politics in 2009 for his thesis ‘Political Parties as Victims of Populism and Electoral Compulsions: A Quest for systemic Solutions.’ His research was later published in the form of a book, entitled ‘Beyond a Billion Ballots.’

Twice fellow of Salzburg Seminar, Dr. Sahasrabuddhe has traveled abroad extensively. He has visited more than 15 countries for seminars and conferences.

He has half a dozen Marathi and English books to his credit, two of them award-winning. His areas of interest and study include democratic polity and governance, national integration and empowerment of the voluntary sector.