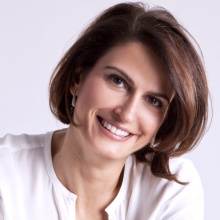 Rana Nejem started out her career as a broadcast journalist with Jordan Television. After working with CNN during the First Gulf War, she moved to the Royal Hashemite Court where she was responsible for His Majesty the late King Hussein’s International Media Department for 2 years. Rana then moved into the field of communications and public relations leading the public diplomacy and communications work of the British Embassy in Amman for 18 years.

Throughout her 25-year career - whether it was conducting interviews with Heads of State, making arrangements for Royal visits and VIP events, formulating communications strategies or attending diplomatic corps receptions and formal dinners - business etiquette and protocol and cross-cultural communications were always an essential part of her work. Rana learned first hand from top professionals in the field and put it all into practice throughout her career.

Rana carries a Masters degree in International Communications and Negotiations from The Fletcher School of Law and Diplomacy, and is certified as an International etiquette consultant by the International Etiquette and Protocol Academy in London. Rana was also trained by The Protocol School of Washington in International Protocol Management, and is a trained coach in Inter-Cultural Intelligence.

Rana founded her own company in 2013 - Yarnu - an Arabic word meaning to look towards, to aspire to with calm and serenity. Yarnu helps people to distinguish themselves by raising their social and cultural intelligence, enabling them to float with ease and confidence from one situation to the other. Yarnu is the first to specialise in cross-cultural communications and business protocol in the Middle East region.