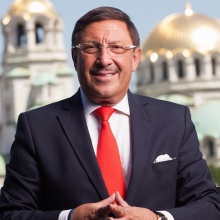 Maxim Behar is a leading Public Relations expert, Founder, Chief Executive and Chairman of the Board of Directors of M3 Communications Group, Inc. - a leading company in the field of Public and Media relations in Bulgaria. In 2015 Maxim Behar was elected President of ICCO - the largest and most influential global organization of Public Relations professionals and practitioners. In 2016 he was appointed to the Advisory Board of the first Museum of Public Relations - in New York and became the first Bulgarian ever included in the prominent annual Global Power Book of the renowned British weekly PR Week.

Maxim Behar uses his wide experience and strong presence in many countries all over the world in his daily PR and international business activities. He is currently Co-Chair and Member of the Board of World Communications Forum in Davos, Switzerland, Chairman of the Board of Trustees of For Our Children Foundation, Vice-President of The Atlantic Clubin Bulgaria and many more. He is also Honorary Consul General of Republic of Seychelles to Bulgaria. One of his favorite rules in life is: If your dreams don't scare you, they aren't big enough!

M3 Communications Group, Inc. has won many awards and recognition from all over the world – PR Agency of the Year (numerous times), "Best PR Agency in Europe", "Best corporate website" and recognition as the strongest PR Brand in the Bulgarian market. In 1999, Maxim Behar became the first Bulgarian to receive full membership in the International Public Relations Association. Six years later, in 2005, he was once again the first Bulgarian to become full member of the American Public Relations Society. In 2001 he was elected President of the Bulgarian Business Leaders Forum and in 2004 he was announced Face of the Bulgarian Tourism. Over the years he has received the award Communicator of the Decade of the Association of Business Communicators of India (ABCI), has been voted Bulgaria's Manager of the Year and has been chosen for Global Chairman of the Year - Stevie Awards, NYC.

Maxim Behar’s work extends beyond corporate relations. He has significant presence in all types of public, media and international relations, tourism, journalism, diplomacy and philanthropy. He was an official guest at a breakfast with UN Secretary General Ban Ki-moon in 2011. Moreover, during a visit to Jerusalem, he had official meetings with two Israeli Prime Ministers - Shimon Peres and Tzippy Livni. He has been invited twice to the US – 1st on a dinner with President George Bush at the National Building Museum in Washington D.C. and in 2010, on a dinner with US Secretary of State Hillary Clinton and Israeli Defense Minister Yehud Barak during the American Jewish Committee (AJC) annual convention. Mr. Behar’s works over Europe have involved many activities - he was a Press and Public Relations Director during Hillary Clinton, US First Lady's, visit to Bulgaria in 1998.  Maxim officially hosted Prince of Wales’ visit to Sofia in 2003.

Mr. Behar is engaged in the social and cultural life of the country. Maxim is also a practitioner and a believer in the idea of a more ethical world. He serves on the Board of several organisations including Junior Achievement Bulgaria (2001 – 2012). Before that he served as Chairman of the Board of the Bulgarian Association of PR agencies (2009-2011), and is now a Member of the Board.

Maxim's latest book Generation F reached #4 of sales on Amazon and his previous books 111 Rules on Facebook and Secondary Instinct were also considered best sellers in the country.

Maxim graduated in Engineering Economics and earned an Advanced degree in International Economic Relations from the Prague Economics University. After that he has completed other prestigious courses as "Thought Patterns for High Performance" "US Agency for International Development – 2000" in US and "Full Corporate Program of Japanese Style of Management" in Japan. While he was studying he began his career as a journalist in Bulgaria, the Czech Republic, and Poland and this shaped his future career. He remained active in journalism until 1995. Mr. Behar is a polyglot fluent in Bulgarian, English, Czech, Polish and Russian.