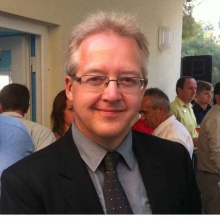 Paul St John Mackintosh is a business media professional as well as published poet, writer and translator. He worked for 12 years in Greater China as a journalist and PR executive before moving to Hungary, and is closely familiar with most Central and Eastern European, Asian and Middle Eastern markets. Paul currently works as Senior Consultant with Capital Communications, specializing in international cross-border projects.

For six years prior to moving to Central Europe in 2011, Paul was Managing Editor of the Asian Venture Capital Journal. In this role, he was personally involved in the growth and maturation of Asia Pacific private equity and venture capital from cottage industry beginnings to its current status as the third pillar of the international private equity/VC industry. He is personally acquainted with most of the leading investors, venture capitalists, technopreneurs and private equity leaders across Asia Pacific. At AVCJ, he also supported many significant private equity/VC events across Asia, as commentator, MC, editorial lead and guest speaker.

As well as writing on literary, digital publishing, and other topics, Paul still writes regularly on tech investment and private equity for publications in Asia and Europe, with regular attendance at European Venture Capital Association summits and other similar events.