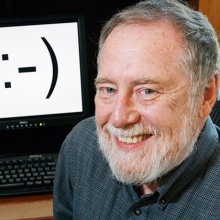 Scott E. Fahlman is Research Professor in Carnegie Mellon’s School of Computer Science (SCS). Within SCS, his primary affiliations are with the Language Technologies Institute (LTI) and the Computer Science Department (CSD). He is also affiliated with the Human-Computer Interaction Institute and the Machine Learning Department.

Scott is the person who suggested using :-) for "I'm joking" and :-( for "I'm being serious" in an online bulletin board post on September 19, 1982. This small event was the seed that grew into the extensive international use of online emoticons that we see today.

As a researcher, he is primarily interested in Artificial Intelligence and its applications. He has worked in many areas of AI: planning, knowledge representation, image processing, natural language, document classification and processing, artificial neural networks, and the use of massively parallel machines to solve AI problems. He is also interested in the use of AI techniques to build better user interfaces and context-aware systems.

Currently, he is working on Scone, a practical system that can represent a large body of real-world knowledge and that can efficiently perform the kinds of search and inference that seem so effortless for us humans. This work is based in part on the NETL system that he developed for his Ph.D. thesis many years ago, but the new system is designed to run on a standard workstations and servers rather than on special parallel hardware.

Scott believes that such “knowledge base” systems will be important tools in the future, perhaps used in even more ways than database systems are used today.

In addition to his AI research, Scott has worked on tools for incremental, exploratory development of complex software systems. He was one of the principal designers of the Common Lisp language. His research group developed the widely used CMU Common Lisp implementation, which set a new standard for Lisp performance. After that, the gorup worked on innovative software development environments for Dylan and Java.

From 1996 to 2000 Scott was the head of Justsystem Pittsburgh Research Center (also known as “Just Research”), a 25-person research lab located a few blocks from the CMU campus. From July 2000 through April 2003 he was on leave from Carnegie Mellon, working for IBM’s Watson research Center, though he was physically based in Pittsburgh.

Scott is a Fellow of the Association for the Advancement of Artificial Intelligence (AAAI).