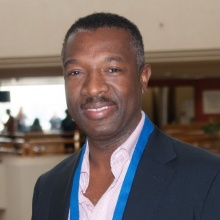 Solly Moeng is an experienced General Manager with specialization in holistic Brand Management and Strategic Marketing & Communications. His professional career so far has taken him to Canada, USA and France, where he completed his French MA Degree. He was the South African Tourism Marketing Manager in Canada, based in Toronto, before getting appointed to lead the organisation’s operations in the USA. As Country Manager based in New York, he managed the roll-out of South Africa’s Tourism Growth Strategy both in the US and Canada.

Fluent in French, Solly has also worked as Business Development & Marketing Manager of Mesure, a South African subsidiary of the French multinational construction company “Bouygues Travaux Publics, Basil Read”, a position that enabled him to act from the company head office in St-Quentin-en-Yvelines, just outside Paris. He has also occupied the Marketing & Communications Manager position for CapeNature and the South African Biodiversity Institute which is in charge of the world famous Kirstenbosch, Cape Town, and eight other National Botanical Gardens in South Africa. Solly completed the IMM’s Post-Graduate Diploma in Marketing and attended courses at the respected Vega School of Branding.

He is now enrolled for a PhD at the University of Cape Town (UCT), focussing on how the nuclear industry integrates media in its crisis communications.

He has led a large number of consulting teams in:

Solly is also an ex Cape Times columnist and continues to write commissioned articles for other professional and business publications.