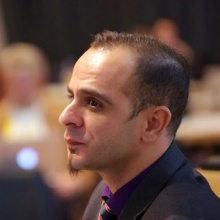 Flávio Oliveira was born in João Pessoa, the second greenest city in the planet, situated in the Atlantic coastline, Northeast of Brazil. Since the year 2000, he has been living between Brazil, the UK, France and the Netherlands. He is the Global PR Manager at UBM EMEA Amsterdam and #WCFDavos Ambassador for Brazil and the Netherlands.

Flávio has worked in many roles in different communication areas, such as: research, events' management, stakeholder engagement, content creation, industrial networking, intercultural coacher, translator, business interpret, journalism, foreign correspondent and media relations. Flávio has an extensive experience in working in multi-cultural environments considering he has worked with Chinese, Indian, American, English, Dutch, Russian and Brazilian organisations in the course of his career. Flávio's experience with market intelligence includes researches on industrial sectors as Energy, Pharmaceutical, Automobile, Non-alcoholic Beverages and Real State, mostly within the Brazilian territory. He is a specialist in Brazilian culture & business.