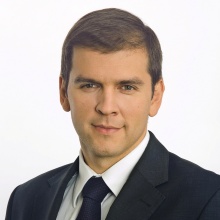 Sergey Novikov is a Journalist, PR-director, and producer - born in 1977 in the city of Nizhny Novgorod (Russia). For last 7 years - working for Russian nuclear energy.

He has established the Communication department of State Atomic Energy Corporation "Rosatom" and leads a team of high professionals. Rosatom includes companies of the civil and defence nuclear sectors, nuclear and radiation safety complex, nuclear ice-breaker fleet, basic science organizations. In total, Rosatom incorporates more than 240 companies and organizations with 262 000 of employees.

In 2012 Rosatom has received a “Silver Archer award” - professional prize for excellent achievements in PR sphere. S.Novikov was recognized as a media-manager of the year in the field of “Corporate communications”.