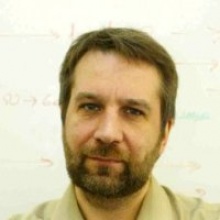 Journalist, analyst, media manager and media investment expert.
Joined the professional circle in 1985 and still somewhere around.
Worked almost in any type of media industries - newspapers, magazines, TV/radio, media management in TV and publishing, printing, etc.
In 2005 joined a wonderful team of Promsvyazcapital.
In 2006-2010 served as managing director and strategy director for the Media Group of PSC, later converted into Media3 Russia - the largest Russian printed media and media services holding, that comprised such valuable assets as Argumenty i Fakty (the biggest national weekly), Trud (daily newspaper), Extra-M Group (largest network of shopper weeklies), Media-Pressa (leading national printing company), Aria-AiF (second national distribution and press retail company).
Developed both the strategy of the Group's creation, the Group's practices, value chain and marketing message.
In 2006 was elected vice-president of the Russian Publisher's Guild and still holds this position.
In 2008 was elected Board Member of IFRA and consequently became Board Member of WAN-IFRA after a merger of two major international associations in newspaper's world.
In 2009-2010 published a series of articles and interviews in various Russian media on future of newspaper business and the evolution of the business models. Works could be found at either www.slon.ru/blogs/gatov or at www.postjournalist.ru.
In May 2010, assuming the Media3 crusade accomplished, resigned from a position of The Board and CEO Adviser; effective June 15th 2010.