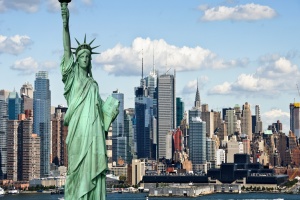 You start your day switching off the alarm clock on your Apple Iphone and briefly checking the latest news on Facebook. You go to work, posting your Starbucks coffee on Instagram on the way. On entering the office you already know that “millions” of important e-mails are waiting for you on Microsoft Outlook. For your presentation you need some background information – look it up on Wikipedia! And in the evening you watch the next season of “Game of Thrones”.

Modern communication was invented in the United States of America and from there it spread over the whole world. Those American guys have taught 7 billion people how to communicate because they are the best in this field. Now we are happy to offer you a unique opportunity! Learn more from the best American communicators on visiting them at their “homes bases”.

Together with Sean Gardner, one of the most valuable and influential players of the social media world, you`ll visit the offices of the most important American political, PR, SM and educational organizations in New York, Washington, Los Angeles and San Francisco. Hollywood, Silicon Valley, White House, Times Square and much more are on your way! Make new contacts and collect international experience with the colleagues from WCFA!

Here's why you should join us on our trip to America:

You can BOOK ONLINE!

The Public Relations Museum and reference library provide an historical review of the profession through a growing collection that chronicles the evolution of the field.

PR Week is the leading source of news, analysis, features & jobs
for the Public Relations industry.

Location: to be confirmed.

Rockefeller Center is a large complex consisting of 19 high-rise commercial buildings covering 22 acres (89,000 m2) between 48th and 51st Streets in New York City. Commissioned by the Rockefeller family, it is located in the center of Midtown Manhattan, spanning the area between Fifth Avenue and Sixth Avenue. It was declared a National Historic Landmark in 1987 .

You will learn about the history and structure of the UN, and receive information on the iconic buildings located by the East River.

You will learn about the work of the different United Nations organs, such as the Security Council and the General Assembly. The General Assembly Hall is where all 193 Members States of the Organization convene to discuss global issues.

When official meetings are not in session, you will also be able to see four newly renovated chambers listed below:

- the Economic and Social Council Chamber

Los Angeles - Hollywood Tour (to be confirmed)
The Hollywood tour brings you closer than ever to the entertainment you know and love.

Get ready to experience one of the busiest movie studios in LA with us.

Los Angeles - Paley Center for Media visit (to be confirmed)

The Paley Center for Media, with locations in New York and Los Angeles, leads the discussion about the cultural, creative, and social significance of television, radio, and emerging platforms for the professional community and media-interested public.

Los Angeles - meeting with Serena Poon
Experience-exchange in the field of Public Relations and Communication.

From designing the first manufacturable mouse for Apple to advancing the practice of human-centered design, IDEO has long been at the forefront of creating change through design.

OhmniLabs manufactures robots that help elders and their families address the fear of loneliness. Its robots facilitate families to virtually provide companionship and care to elders.

Cameron Craig, Global Head of Corporate Communications, Polycom, will share how communication played a pivotal role in Apple’s turnaround period from Steve Jobs return as CEO to the launch of iPhone. Over this period, Apple would prove the cynics wrong and dazzle the world with its groundbreaking innovations, masterful marketing and against-the-grain approach. Cameron will share five communications lessons from those days and how you can take advantage of these same principles for your company or brand. Themes include the importance of keeping it simple, prioritizing influencers, staying focused on your message, and leveraging outside milestones for internal momentum. Cameron was with Apple for 10 years under Steve Job’s leadership including three years as corporate communications lead for the Asia Pacific region based in Singapore.

Stanford is the second best university in the world according to the latest rankings.

Based in Silicon Valley in California, tucked away between the green rolling hills of San Jose and the heights of San Francisco, Stanford University’s manicured lawn has been trodden on by some of the world’s brightest researchers, tech entrepreneurs and influencers of our generation, including Elon Musk, Sergei Brin, Peter Thiel, John Kennedy and Larry Page.

Witness panoramic views of the sunset on San Francisco Bay

Experience-exchange in the field of Public Relations and Communication.

Closing dinner.
Location: to be confirmed.