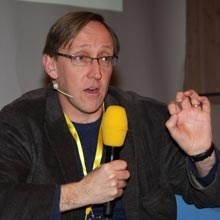 I like to challenge people, I like to do something in my talk to grab their attention, so saying that physics is the most socially humiliating thing you can do and then trying to challenge that perception is one of those things. And I also think that, you know, as I said in my talk, I think that we have great stories to tell and I really do believe that, I think that we have great stories to tell that can engage people. I’m absolutely convinced that everybody in the world is a scientist. They don’t necessarily know it, but everybody thinks scientifically, everybody is curious, everybody likes to explore. We all look at stars, we all watch Star Trek and science fiction things and dream about what’s out there in the universe. What my field of research does is start to tell us what the universe is made of, how it behaves, where it’s coming from. I think most people are intrinsically interested in that, so I think we’re starting from a strong position.

It’s extremely important that people have a feel for science and understand where it fits in society. You’ll find people who say they’re quite happy to use this thing I carry (a cellphone), they don’t care how it works as long as it works. But I think most people would actually be interested to know that if it wasn’t for Albert Einstein this thing wouldn’t work and if it wasn’t for quantum mechanics this thing wouldn’t work. All that basic science is in there. For our, let’s say, political audience, it’s also important to understand that you can’t make a choice between basic and applied science. This is a message that my boss, who is here in Davos, a couple of weeks ago was delivering. We were often made to think that there is a real choice you can take between investing in blue sky research like we do at CERN and applied science that’s going to refine this kind of technology.

When I read Angels and Demons, the first half of the book happens at CERN and it’s wrong, it’s just wrong, it’s all wrong. So I kept reading these pages saying ‘no, it’s not like that, this is all wrong!’ And then I got to the second half of the book, which is probably wrong as well, but it’s all happening in Rome and there “wow, this is great, this is a really good story.” So at the end of it, I though, what this is, it’s a ticking bomb story, it’s a classic ticking bomb story. It’s an exciting story and it’s going to be a best seller whether we like it or not it’s out there. So what can we do, do we ignore it, do we say “Dan Brown is an idiot, he’s got it all wrong!” or do we just run with it, have fun with it and we thought we’d have much more success at passing our own messages if we just had fun with it, so that’s what we did. And then when Hollywood came knocking we said “sure, you can come and work with us” and I was really, really impressed with the creative people from Sony Pictures who made the film Angels and Demons because they wanted to really tell the ticking bomb story. They didn’t want to get bogged down in bad science and things like that, so they squashed all the science into the beginning, hid it away, so they didn’t care that the science was wrong, it’s just a fact, here is this anti-matter bomb that’s going to blow up the Vatican if we’re not careful and they didn’t worry about the science and again what was great about that story for us is that the hero, or the heroine of the piece was an attractive female physicist. What better role model can we be aiming for than that? Fantastic stuff!

Metrics and measuring what we do is one of the biggest challenges we’ve had and I heard that this morning in the debate there, speakers were saying that PR people don’t understand data, they don’t know how to evaluate. You know, I have to admit that, in a way, they’re right. We’re good at counting clicks, counting media mentions, we’re good at all the quantitative stuff, getting the numbers, we’ve got a load of followers on twitter. What does that mean? It’s the qualitative stuff, how what we do is helping us to achieve our strategic goal, our objectives as an organization, it’s much, much harder to measure and I have to confess that at this stage we’re doing it mostly anecdotally.

Maybe I can talk about something that happened here a couple of week ago, which was, again, at the Davos World Economic Forum. There was a one hour discussion between the founder of the World Economic Forum and Bill Clinton and at the end of that discussion Bill Clinton was asked “What’s important to you? What’s the most think to you for the next decade?” He talks about grandchildren, things like this, then he starts talking about science, he talks about the search for planets that are like the Earth out there, he talks about how, if you’re not Sub-Saharan African you’re four percent Neanderthal and all this stuff and he’s really excited about science and the very last thing he said – remember, after an hour of discussion he’d been asked what’s important to you – the very last thing he starts talking about – is what we do, is the Large Hadron Collider, it’s the research that we do, it’s about how science is a force that can bring people together, because it’s a common goal that all of humanity is after and this quest for understanding, so, to me, the fact that we’re on Bill Clinton’s radar… He then started talking about the actual science and he got the details a little big wrong, but the fact that we are on his radar, he thinks it’s important, that to me says we’re going the right way.

The people who come to CERN to do their research come from all over the world, there’s no monopoly on brains anywhere in the world, people can be clever, they can be curious from wherever they come in the world and that says fundamental to the organization I work for. So we have this community of however hundred nationalities working there. They’re all smart people, they are all motivated by understanding the universe, that’s what makes them tick, but to do that they need big machines and powerful machines, highly sophisticated machines, and what they tend to do is we have great synergies with all these people coming together with different approaches, different viewpoints, backgrounds, that really makes things work. What tends to happen also is when they find that they need a piece of technology and they go out and try to buy it and find it doesn’t exist, they make it. So that happens and you have real clear examples of technologies coming out because, let’s give a concrete example, not because somebody wants to make a new kind of medical imaging device, but because they want to understand the universe. It just so happens that the technology they need is useful there and this actually happened. In recent years, that technology was developed in CERN for measuring particles and understanding the universe, it’s now being clinically trialed to combine PT and MRI – two different medical imaging techniques in the same scanner. So there are all these things come together at CERN in a way.

I think we’ve created a lot of expectation that we’re out there, CERN is a recognized brand. People know that we’re there, they don’t really know what we’re all about and now our real challenge is to sustain that. We’ve got over all the hype – we started this big machine, the world hasn’t disappeared – and now the real work begins for us, because we want to get  across the messages that we have about how important basic science is for society, how important it is for science to be part of society, not separate. As far as I’m concerned, there aren’t two cultures, there isn’t a culture that belongs to humanity and one to scientists, we’re all in the same and people should be talking about science just as they’re talking about football or anything else that they care passionately about. So sustaining that.

I think what we’re seeing now that we’ve gone from a stage where we all used to go and buy a newspaper or watch a television station or listen to a radio station and what we tuned in or picked up in newspaper, you knew what you were getting. You knew from the title on the top of the page where it was coming from. And then we had this explosion of Web 2, everybody could publish and everybody did and people were like “what do I believe, what’s trustworthy and what’s not?” There are some fascinating experiments of people going on and hacking Wikipedia and then seeing it appear in the mainstream media.

People are learning to navigate their way around this new landscape better, they are learning to know who you can trust and who you can’t and even the chap from RIA Novosty was saying that his journalists, they do their factual reporting, but they do their opinion too and I was thinking when he was saying that in sources that I consume from the UK, for example The Guardian newspaper, their journalists do a newspaper’s bit and there is the ‘comment is free’ part. The same people are writing, but you know where they are coming from. So I think the social media landscape is beginning to become more defined.

I would tweet that there are some very interesting stuff going on in this conference and I’d probably tweet a link to the life feed, so people could join the forum.

I think that things like this bring important professional recognition to the field.